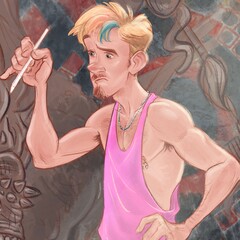 I am a Concept Designer and Storyboard Artist, specializing in both digitally and traditionally-based 2D media with an emphasis on character, creature and story development. I have worked on numerous film, television commercial and music video productions with Landmind Productions (Fir Street Studios) and am developing several multi-platform projects of my own.